You are here:
Home
News Releases
Sale of goose meat from Orkney extended 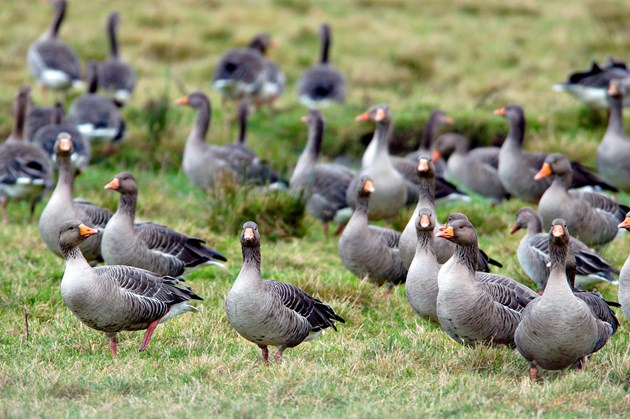 The sale of greylag goose meat on Orkney has been extended to 31 January 2020, to encourage the use of fresh, seasonal, wild goose meat and help boost local business, Scottish Natural Heritage (SNH) announced today.

The sustainable control of resident greylag geese populations is licensed to safeguard agricultural crops, as part of the Orkney Resident Greylag Goose Project. The project was allowed to sell meat until 31 October, and this extension takes advantage of the European Commission’s approval for Scotland-wide sales until any new potential EU exit date.

These licences permit the sale of resident greylag goose meat in Scotland directly to consumers as well as to retailers, such as hotels and butchers.

‘We are delighted to announce the continued sale of resident greylag goose meat. Now, licensed sellers from Orkney will have a chance to develop the market for their product and people can try goose for themselves, on Orkney, and across Scotland.

“Wild geese are an important part of Scotland’s nature, but their rapid rise in numbers has been challenging for farmers and crofters. We know that striking the balance between conservation, farming and hunting can be difficult.

“Our goal is to give farmers and crofters the tools they need to safeguard their crops, allowing them to control goose numbers sustainably and sell goose meat for profit.”

SNH is working to secure longer term arrangements for the sale of resident greylag goose meat in Scotland.  A project review will take place in January 2020, in light of the UK’s EU exit arrangements, and to take account of any changes arising from the current review of its General Licences.

Sale of wild goose meat shot outside the project is prohibited under the Wildlife and Countryside Act 1981.

Populations of resident greylag geese expanded very rapidly in some parts of Scotland in recent years, resulting in farmers and crofters struggling to control their impacts using traditional means. In Scotland, farmers and crofters have traditionally controlled resident greylag goose impacts with non-lethal and lethal scaring, undertaking lethal control in the open season and, under much of the closed season, under licence from SNH.  Resident greylag geese are a quarry species, listed as a species of Least Concern (not endangered, threatened or vulnerable).

These four pilots ended in March 2017, and SNH is supporting local goose management groups to develop locally-led options for sustainable resident greylag goose management.  The 2019 Transitional Challenge Fund will help local goose groups continue to control goose numbers in 2019 and investigate alternate methods to reduce resident goose numbers in the future.  SNH and local goose management groups are also exploring other options together, such as more flexible licences when necessary, a review of bag limits in some areas, and licensed egg-oiling.  For more information on the Challenge Fund, see http://bit.ly/2Y0Vqo3 .