You are here:
Home
News Releases
PAW Scotland warns of risky dolphin and whale encounters in Scotland this summer 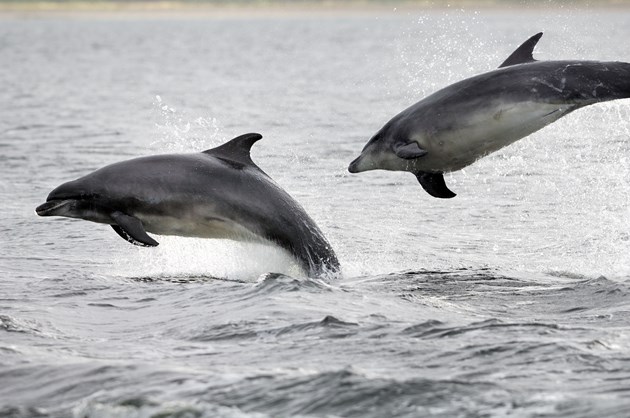 Several incidents in Scotland this summer involving dolphins, orcas and humpback whales have endangered not only the animals, but also boat operators.

The Scottish Government-led Partnership for Action Against Wildlife Crime Scotland (PAW Scotland) is urging boat and marine craft operators to respect Scotland’s marine wildlife or they could risk endangering themselves and the animals, as well as face criminal charges.

This follows a number of incidents around Scotland this summer which are being investigated by Police Scotland: in Shetland, a photographer in a boat circled a pod of killer whales too closely and then split the pod; and there have been boats causing problems with dolphins at Chanonry Point and at Aberdeen Harbour. There have also been a number of other incidents in Shetland where boats near busy marinas or harbours have been too close or going too fast to pods of killer whales, and ongoing issues on the Tay with jet skiers and dolphins, particularly near Broughty Ferry. Members of the public have also raised concerns about boats going to close to humpback whales seen recently at St Cyrus National Nature Reserve.

Whales, dolphins and porpoises (collectively called cetaceans) which frequent our coastline are protected under the Conservation (Natural Habitats) Regulations 1994. This includes protection from disturbance (whether it be reckless or deliberate), harassment, killing and injury, with offences subject to a fine of up to £5000.

Sgt. Andrew Mavin, Police Scotland Wildlife Crime Co-ordinator explained, “We’ve received several reports of boat operators getting far too close to cetaceans, sometimes apparently following them to get a good photograph. These animals are extremely powerful and people shouldn’t get too close for obvious reasons; there is also a possibility of injury to the animals themselves from boats and other marine craft. There are clear guidelines available for watching marine wildlife, so ignorance of the law is not an excuse.  I encourage anyone witnessing a suspected crime to contact police Scotland on 101 as soon as possible.  Details of the boat or craft are essential to help us identify the operator.”

Dr Fiona Manson, Marine Ecology Advisor with Scottish Natural Heritage (SNH) added, “I’d encourage anyone visiting the coast for wildlife watching to read the Scottish Marine Wildlife Watching Code. It provides clear advice on how to act responsibly to keep within the law – and also on how to get the most out of your wildlife watching.”

If approached by cetaceans, boat operators are advised to reduce speed and cruise on a steady course heading away from the animals. This gives the cetacean the chance to escape or approach. Avoid rapid changes of direction and high revving engines, as this can disorientate the animals. Never put a boat in the way of the animals’ escape out to sea – for instance, by blocking them in a harbour or bay.  All operators of marine craft should familiarise themselves with the code. The code can be found at www.snh.gov.uk/marinecode.

The best way to watch cetaceans is by going on one of the many dolphin and whale watches around the country, run by RSPB, Whale and Dolphin Conservation, and others. Some boat operators also offer specialist trips, but look out for the WiSe (Wildlife Safe) accreditation.

All photos are of bottlenose dolphins, taken at Chanonry Point, Moray Firth. Copyright SNH, free to use.

The Partnership for Action Against Wildlife Crime Scotland (PAW Scotland) represents a wide range of bodies concerned with the prevention and tackling of crimes against wildlife. It includes agencies like Scottish Natural Heritage, Police Scotland and prosecutors as well as organisations representing a wide range of conservation and land management interests. The Executive of PAW Scotland is chaired by the Minister for the Environment, Climate Change and Land Reform.

Further information can be found at www.PAW.Scotland.gov.uk