A new population of globally endangered freshwater pearl mussels has been discovered in a Scottish river, giving fresh hope to scientists working to conserve the rare mollusc.

The successfully-breeding population was found in one of the tributaries of the River Spey in an area of native woodland by a graduate on the Scottish Natural Heritage (SNH) placement scheme.

Kieran Leigh-Moy has been working on a project to understand why the declining populations of freshwater pearl mussels in the river were not breeding and locate sites where they could be reintroduced to help their recovery.

While developing a method for identifying the most suitable locations, he came across a previously unknown population which, significantly, contained juveniles.

Freshwater pearl mussels can live up to 280 years old, but the species is critically endangered as a large proportion of the populations across Europe have not been successfully breeding for several decades.

Kieran said: “I’d already identified this river as potentially having good quality habitat, so was visiting the site to conduct more in-depth surveys to see if it would be a suitable site for a reintroduction, but was stunned to find juvenile freshwater pearl mussels already there.

“It’s really rare to find a new population of these mussels, and especially one that is breeding successfully, so it was a really exciting moment.

“What’s particularly significant is that the juvenile mussels found were many miles away from the nearest known breeding population and that’s good news because it could help to prevent further range contraction of the species.”

It is hoped the approach developed by Kieran can be used to help prioritise conservation efforts and find good habitat for freshwater pearl mussels at other locations as well as mitigate the shrinking range of the species in the river.

The pearl mussel is a strong indicator of good environmental conditions and their recovery in this part of the catchment is likely testament to sensitive land management in the area.

SNH and Forestry and Land Scotland are working to promote this kind of land management, which includes reducing pollution and establishing riverside woodlands, through their support of the Spey Catchment Initiative.

Giles Brockman, from Forestry and Land Scotland, said: “This is really exciting news.

“Forest management is not just about trees and this is a strong indication that actions to protect water courses are effective and can help to sustain and nurture wildlife and rare species.”

This type of land management will help allow rivers, and iconic species like pearl mussels, to cope with increased temperatures resulting from climate change. This is especially important for freshwater pearl mussels, which are a species that is particularly sensitive to any changes in climate.

SNH has also been promoting sensitive land management more widely through our work to protect freshwater pearl mussels in the Pearls in Peril LIFE project that sought to save and restore populations in 21 rivers across Scotland, England and Wales.

Through its £1.8 million Biodiversity Challenge Fund, SNH is supporting a number of projects to enhance key freshwater pearl mussel populations across Scotland.

Together with the Scottish Government the organisation is also managing a project starting this month to identify the sources of fine sediments in three key pearl mussel catchments - including the River Spey.

APEM and the University of Plymouth have been appointed to conduct state-of-the-art “sediment fingerprinting” (to identify the sources of sediment within the catchment) where there is evidence that important mussel populations are being adversely impacted by fine sediment inputs. This will be the first step in reducing the impact of fine sediments on freshwater pearl mussels, which is identified as among the primary drivers of the decline of this species across Europe.

For more information or interviews, contact the SNH press office on snhmedia@nature.scot or 0131 316 2655.

The exact location of the site is not being made public to protect the freshwater pearls mussels from potential illegal harvesting.

Declines throughout Europe have been driven by habitat degradation through insensitive land management, reduced water quality, river modification and climate change as well as the illegal harvesting of mussels for their pearls. 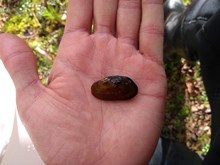