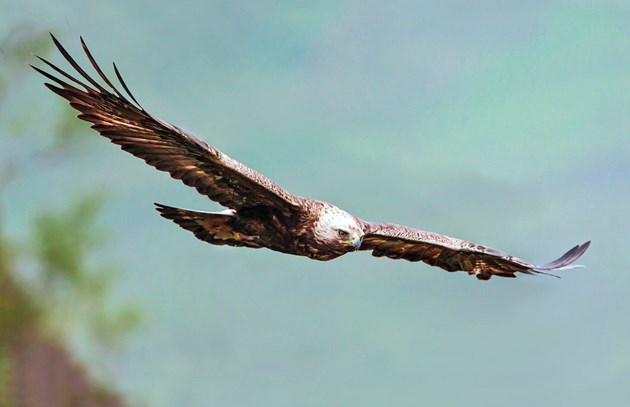 News release from the Golden Eagles in South Scotland Partnership

The groundbreaking South of Scotland Golden Eagle Project has launched what is believed to be the UK’s first-ever Eagles Schools initiative to help safeguard the future for Golden Eagles in Scotland.

Sixteen primary schools in the Scottish Borders and the Highlands are among the first to take part in the new initiative, which gives pupils the opportunity to learn first hand from experts working with the golden eagles about this iconic species and its importance to the natural environment.

Since the launch of the new scheme 324 pupils have had the opportunity to take part in a range of fun and inspiring activities, which reflect the Curriculum for Excellence and take an innovative approach to individual learning. Some even got to meet a golden eagle. The project is also now facilitating links between Eagle Schools in the south of Scotland and those in the north to provide exciting opportunities that are beneficial to both schools.

Speaking on the launch of the initiative Rick Taylor, Community Outreach Officer for the South of Scotland Golden Eagle Project said: “Earlier this year we transported three golden eagle chicks from the Scottish Highlands to a secret location in the Southern Uplands of Scotland. It is thrilling to see these young birds now thriving in their new habitats and fending for themselves.

“Significant community support, including support from local schools, played a vital role in this early success. We need to keep building on this so that we can ensure that we can see even more of these magnificent birds across the south of Scotland’s skies. We are absolutely delighted to see the passion and enthusiasm from pupils at our first Eagle Schools in the Borders and the Highlands. It certainly gives us great hope for the future. Their involvement and continued enthusiasm will truly help to protect iconic species like golden eagles for generations to come.”

Speaking of their involvement Principal Teacher at Yarrow & Kirkhope, Mrs Hoppé said: “We were really excited to be one of the first schools to take part in the South of Scotland Golden Eagle Project’s Eagle Schools initiative. It really brought our community together and I would thoroughly recommend it to anyone. The children have had the most amazing experience. We are incredibly proud of the interest our pupils have shown in protecting this majestic and important bird. We look forward to support the project to make sure that golden eagles flourish in the south of Scotland.”

The Eagle School Program culminates in 'Eagle Day'. On this day the school opens its doors to families and local people with students sharing their learning and achievements with their community. The event includes an exhibition of work and a presentation ceremony, where students receive individual certificates. The day ends in a visit from a real, falconry golden eagle.

Callum, a pupil Kirkhope Primary School who was presented with an Eagle Schools’ certificate for his involvement in the project said: “I really liked meeting all the birds of prey that were brought from the falconry centre. It was amazing to hear about how they hunt.”

Classmate Josh added: “I loved learning about the eagles: they were fascinating and now I know more about them I have a greater interest and want to learn more.”

Francesca Osowska, Scottish Natural Heritage’s Chief Executive, said: “It’s wonderful that children are having the chance to see and learn about these amazing birds. I remember how fantastic it was the first time I saw a golden eagle. The more people who can experience this, the better – and the Eagle Schools will help to make that happen. We’re passionate about returning golden eagles to places where they were once an important part of our wildlife, so they can help Scotland’s nature thrive.”

The pioneering South of Scotland Golden Eagle Project has been set up to address low numbers of golden eagles in the South of Scotland. Project partners RSPB Scotland, Scottish Land & Estates, Forestry Commission Scotland, Scottish Natural Heritage, and the Southern Uplands Partnership, have been working together for more than eleven years to bring it to fruition. Funded by The National Lottery, project partners, the Scottish Government and local LEADER Programmes, the initiative is a key project under the Scottish Government’s 2020 Challenge for Scottish Biodiversity (which sets out a route map to protect and restore Scotland’s biodiversity).

For more information and the latest news on the Eagle Schools visit: www.goldeneaglessouthofscotland.co.uk

About the South of Scotland Golden Eagles Project