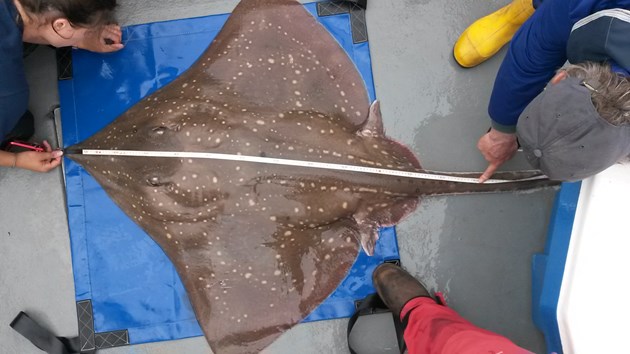 An online resource for tracking the movements of some of the largest and rarest creatures in British waters has been expanded.

The Skatespotter website, which includes details of 1,500 critically endangered common or flapper skate, has been updated to include historic records that give an improved insight into the lives of individual fish over time.

The refresh was announced as Scotland’s Year of Coasts and Waters 2020 gets underway.

Anglers are encouraged to submit any photographs of common skate they catch and release to the database, allowing researchers working to conserve the species to identify individual fish by the distinctive spot patterns on their backs and study their movements.

For the first time, historic information from the Scottish Shark Tagging Programme (SSTP) dating back to 1975 has been added, as well as additional tagging data and photographs from Orkney, Shetland, the Outer Hebrides and Portpatrick.

The data reveals interesting details about the skate living in the Loch Sunart to the Sound of Jura Marine Protected Area (MPA) - designated to help protect the species.

Female skate are much more likely to be recaptured, because they tend to remain in the same area, while male skate are less common recaptures because they move around more. Only five males have been captured more than 10 times, compared to 17 females.

Interestingly, the data shows that there is very little movement of skate between the Firth of Lorn and the Sound of Jura in the south. Only two males and three females have moved between the two sites out of 1,500 individuals, a minimum distance of more than 30km as the skate swims.

One of these males - Di000228 - seems to have liked a change of scene, having moved between the two areas several times since 2001. The busiest traveller recorded, he was last spotted in the Firth of Lorn in 2017.

Skatespotter, which launched in 2018, is a joint project between Scottish Natural Heritage (SNH) and the Scottish Association for Marine Science (SAMS).

Jane Dodd, SNH Marine Operations Officer for Argyll and the Outer Hebrides, said: “Expanding Skatespotter to include this historical data for the first time is really exciting because it gives us lots more history for some of the individual skate.

“It helps us to build up a better picture of their movements over time which will in turn contribute to the long-term conservation of the species across Scotland.

“We rely on anglers submitting photographs to the site, and now they will be able to search the website using the SSTP number or date to learn the history of any tagged skate they catch, which hopefully reinforces the great contribution they are making to understanding these amazing fish.”

SNH and the Scottish Association for Marine Science would like to thank the Scottish Sea Angling Conservation Network for allowing access to the SSTP, skate charter skippers and anglers for continuing to submit photos and data and volunteer Sean Jones for updating the website, which is available here: https://skatespotter.sams.ac.uk/

Common skate can grow to more than 2m in length and weigh more than 100kg but despite its name, the species has been listed as critically endangered since 2006 as a result of overfishing.

In 2009 it became illegal to land skate in most of Europe which means any skate caught as bycatch should be released unharmed.

All angling for this species in Scotland is on a “catch and release” basis. Recapturing previously identified skate suggests there is no harm to the fish when released. However, common skate are still at risk from unintentional capture in mobile gear such as trawls and dredges.

More information can be found on the SNH website: https://www.nature.scot/plants-animals-and-fungi/fish/sea-fish/flapper-skate 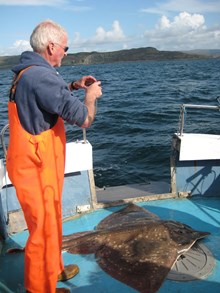 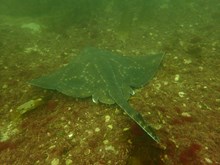