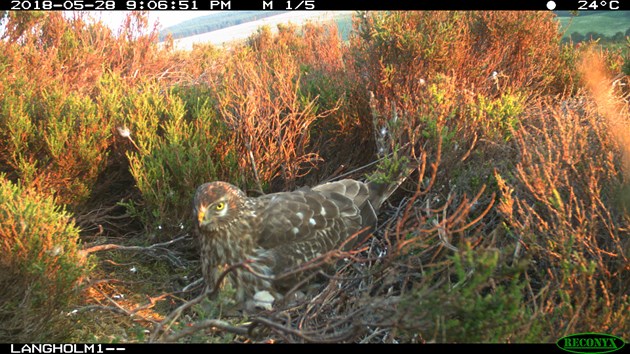 The discoveries were made as part of Heads Up for Harriers, a Partnership for Action Against Wildlife Crime Scotland (PAW) Scotland project, led by Scottish Natural Heritage (SNH). Figures released today also show 30 young birds have successfully fledged on participating estates.

On two occasions, a male harrier was recorded spending up to 35 minutes standing over or beside a nest, guarding the chicks when the female harrier was away from the nest. This is believed to be highly unusual harrier behaviour: usually, the only time a mother leaves a nest for the first six weeks is to briefly catch a food drop from the father. The male calls the female off the nest and drops food, which the female then catches to feed their chicks.

As well, after a hectic night of activity involving a fox and a short-eared owl, five chicks were eventually killed by a long-eared owl. The attack happened early in the morning this spring in the Langholm area of South Scotland.

“As ground-nesting birds, hen harriers already face extra obstacles in order to protect their chicks. That’s why it’s so important that we crack down on persecution against these vulnerable birds, which already face so many challenges to survive.”

Heads up Harrier project field worker, Scott Smith said, "These pictures tell an amazing story that helps us understand the kind of hurdles which hen harrier chicks encounter to survive. Nests can fail for many reasons: the Heads up for Harrier project is keen to learn everything we can to help hen harriers flourish in the future. The more information gathered about why some hen harrier chicks don't survive, the more we can find ways to safeguard them.”

According to the pictures from the nest camera, before the owl attack, the mother spent eight days taking care of her five newly-hatched chicks, until she was scared off the nest by a fox. The fox probably played a crucial part in the night’s events, as harriers aren’t likely to be flushed off nests by owls. The unattended chicks are surveyed first by a short-eared owl, and then killed by a long-eared owl. The long-eared owl ate three of the chicks. The mother then returned to recover and remove the remaining dead chicks just before dawn.

The other field worker for the project, Brian Etheridge, added, “We’re also seeing new behavior as part of the project. We’re surprised in this case that the long-eared owl didn’t take its prey away, but instead stayed at the nest for almost an hour. We haven’t seen an owl behave in this way before and can’t explain it at this point. We also don’t know why the fox and the short-eared owl didn’t eat the chicks when they had the chance.”

New figures for this year show a total of 27 Scottish upland estates took part in 2018, with 17 nests monitored. This year, 30 young birds successfully fledged from eight successful nests. Four nests failed at egg stage and another five nests failed with chicks. The primary reason for failure (at chick stage) was fox predation, accounting for the death of six chicks; however, owl predation and starvation due to adult birds not being able to provide enough food also played a part.

PICTURES – Please credit the Heads Up for Harriers project.

Hen harriers have an amazing and unusual courtship ritual before reaching the nesting stage. To attract a mate, the male shows off his aerial skills, highlighting his ability to complete ‘food passes’ once the female harrier is nesting. This is vital for hen harriers: the only time a mother usually leaves nest for the first six weeks is to catch a food drop from the father. The male calls the female off the nest and drops food, which the female then catches to feed their chicks. Most males are monogamous, but some have been known to feed up to six broods in this manner.

Help conserve hen harriers by reporting sightings by e-mail to HenHarrier@nature.scot or by phone on 07767 671973. When possible, please provide details of places where birds are seen (a six-figure grid reference is best), time and date of sighting and any notes on their behavior – for example, hunting low or flying high up. For more information, see http://www.gov.scot/Topics/Environment/Wildlife-Habitats/paw-scotland/what-you-can-do/hen-harriers

PAW Scotland is the Partnership for Action Against Wildlife Crime in Scotland. The partnership includes conservationists, land management groups, law enforcement and government agencies, who have joined together to fight wildlife crime. PAW Scotland established the ‘Heads Up for Harriers’ group. The group raises awareness of this majestic bird, determines the current number of hen harriers in Scotland, and identifies specific threats to their survival. Further information is available at www.PAW.Scotland.gov.uk

Scottish Natural Heritage is the government's adviser on all aspects of nature and landscape across Scotland. Our role is to help everyone understand, value and enjoy Scotland's nature now and in the future. For more information, visit our website at www.nature.scot . SNH media is also now on Twitter at www.twitter.com/nature_scot

Short-eared owl at nest with chicks 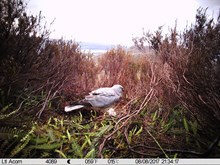