You are here:
Home
News Releases
Anglers asked to get their flapper snaps out

Anglers asked to get their flapper snaps out

Sea anglers who have fished in a west coast Marine Protected Area (MPA) could unwittingly hold information wanted by scientists stored on their phones, hard drives or in family albums.

Marine scientists studying the world’s largest skate species in the Loch Sunart to the Sound of Jura MPA are asking anglers to share any photographs they have of common skate, sometimes known as flapper skate, which were caught and released in the area during the last 10 years.

The species has suffered large declines in population numbers over recent decades and the fish is the main focus of marine biologists’ research in the MPA.

Scottish Natural Heritage (SNH), the Scottish Association for Marine Science (SAMS) and the Scottish Sea Angling Conservation Network (SSACN) are working together on a project looking to see if individual skates can be identified by the spot patterns on their backs.

Loch Sunart to the Sound of Jura was proposed as an MPA by SSACN and designated by the Scottish Government in 2014 to help protect the common skate. The proposal was based on information submitted by volunteer sea anglers showing that the area supports a good number of resident mature common skate, which may also be breeding in the area.

Skate are related to sharks and common skate can grow up to two metres across and three metres long. The species is non-migratory, spending its life in a relatively small area. The fish is a favourite of sea anglers and it attracts visitors from far and wide to the area. It is estimated that sea anglers spend around £23 million a year in the Argyll and Lochaber region alone. All common skate captured in Scottish waters must be released unharmed.

The name ‘common skate’ reminds us that the species was once common in Scottish waters but it is now considered to be vulnerable and is included on Scotland’s list of Priority Marine Features (PMFs) for conservation action. Continuing to develop our understanding of PMFs so we can establish effective protection and management through our network of MPAs is a key area of work in the Scottish Biodiversity Strategy.

So far this research has focused on an archive of more than 400 photographs taken between 2011 and 2016 by local angling charter boat skipper Ronnie Campbell. From these photos, over 200 individual skates have already been identified.

Dr Steven Benjamins from SAMS, who is leading the research, said: “We have been testing whether we can identify individual skates from the patterns of lighter spots on their dark brown dorsal or upper surface. We have found that spot patterns vary a lot between individuals: some fish are almost completely dark brown all over with hardly any spots; some are completely covered in tiny spots in a type of mottled pattern; and some have distinct patterns of large spots.

“Typically the spots themselves are very clear but they can sometimes be blurred at the edges, or spots might have a dark centre, forming rings or doughnuts. Any and all of these features may allow identification of individuals.”

Identification of recaptured skate has shown that their spot patterns do not vary significantly over time, making long-term recognition of individuals possible. The project is developing a ‘Residents Catalogue’ and database containing the best photo of each skate identified in the area.

Dr Jane Dodd from SNH said: “We really want to hear from anglers who have photos of skate captured in or near the MPA over the last several years, up to present day, to add to our photo catalogue. We will of course ensure that individual anglers and fishing marks can’t be identified.

“Being able to identify individual fish will eventually enable us to estimate the size of the skate population in the MPA and how this changes over time. And if anglers can tell us the general area where the skate was caught, this will help us to study changes in distribution and assess whether the MPA boundary is in the correct place.”

The photo identification project complements other skate research being carried out in the MPA to further develop our understanding of the species and how best to protect it. To help us understand how individuals use the MPA, for example, tracking devices have been attached to more than 40 skate caught in the area – the largest of which weighed an impressive 98kgs.

Once the initial Residents Catalogue has been prepared the project will work closely with SSACN to encourage all skate anglers fishing in the MPA and beyond to submit photos of their catch so that a Scotland-wide photo database can be developed.

Ian Burrett, SSACN’s Scottish Shark Tagging Programme (SSTP) Project Director, said “The beauty of photo identification is that there is minimal interference with the fish and it is so easy these days for anglers who are happy to take part to quickly take and submit a photo on their phone.”

Skate 2 - Copyright SNH - one off use 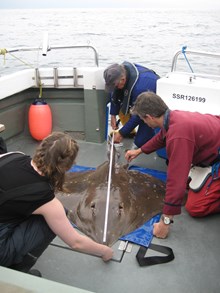